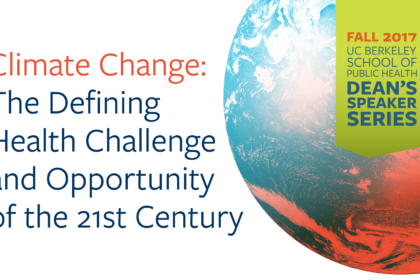 The panel was held on the occasion of a worldwide set of launch events for the first report of the Lancet Countdown on human health and climate change, released October 31, 2017. The report is a product of the work of the 2015 Lancet Commission—an international research collaboration that tracks progress on the relationships between human health and climate change—which at the time concluded that anthropogenic climate change threatens to undermine the last 50 years of gains in public health, and conversely, that a comprehensive response to climate change could be “the greatest global health opportunity of the 21st century.”

The report presents findings on 40 climate change and health indicators across five key domains, with clear messages for health professionals and governments. The report calls for global action around such recommendations as investing in climate change and public health research, scaling up financing for climate-resilient health systems, and phasing out coal-fired power and expanding access to renewable energy to help the 2.7 billion people in the world who rely for energy on the burning of unsafe and unsustainable solid fuels.

The November 1st panel was kicked off with a welcome and introduction by UC Berkeley SPH Dean, Stefano Bertozzi, who highlighted the high level of commitment, investment and passion in the Bay Area and in California around fighting the global impacts of climate change. Discussion among panelists ensued on what can done to address challenges through research, policy, and practice at various levels of intervention. In particular, the State of California has been a U.S. leader in climate change mitigation policy. Hector De La Torre pointed out that California is way ahead of other states when it comes to climate change policies, and that its leadership has previously set the benchmark for global policies, and that California will continue to do what is right.

Speakers also highlighted that if climate change does not remain a priority in the United States, there could be immeasurable setbacks, with other countries poised to make more impactful progress. Professor John Balmes mentioned that China is going to surpass the US in use of electric cars and clean energy cars. Health impacts, both short and long-term, were discussed, including a good discussion about the issues of air quality and climate change impacting mental health and how we can address that in the public health and medical professions. Dr. Gina Solomon said that thing that resonated with her from the Lancet report, was the recognition of climate change as a multi-system disease that ensues at a certain point and is very hard to reverse. Like multi-organ failure in the human body, there are points where negative effects become very hard to reverse — effects pile on and interact with each other in a way that exceeds the ability to adapt.

The panelists urged the audience to take action, to “stay on it”, and make their voices heard.

This talk was part of the Fall 2017 UC Berkeley School of Public Health Dean’s Speaker Series, a series that invites prominent and high-profile public health experts and leaders to UC Berkeley to discuss important public health issues. This particular panel was co-sponsored by the Berkeley Energy and Climate Institute, the Public Health Institute, the Northern California Center for Occupational and Environmental Health, and the UC Berkeley-UCSF Joint Medical Program.