The New Barbarianism screening in the Bay Area

The New Barbarianism screening in the Bay Area “Fixed establishments and mobile medical units of the medical service may in no circumstance be attacked, but shall at all times be respected and protected by the parties to the conflict.” – Article 19, Geneva Conventions

Increasingly, hospitals and aid centers have become part of the battlefield in today’s civil wars and conflicts around the world. This week, Stanford and UC Berkeley hosted screenings of a new Center for Strategic and International Studies (CSIS) original documentary film to bring visibility to the ongoing crisis and facilitate discussion around pathways for action.

So far, there has been little to stop the overwhelming surge of violence seen across several open-ended conflicts which has claimed thousands of lives, destroyed health systems, triggered mass displacement and state collapse, and exposed the crisis facing the norms of international humanitarian law contained in the Geneva Conventions. The film, The New Barbarianism, examines the causes of several ongoing conflicts, building on several years of CSIS’s prior work on the intersection of health and security, the role of militaries, and the human tragedies seen in Syria and Yemen.

The screenings preceded a panel of content experts on both campuses, as well as the film’s executive producer and director, Stephen Morrison, and writer and co-director, Justin Kenny. Part of their motivation behind this project was the realization that modern warfare had really changed, and the need for increased visibility of targeted, deliberate violence on health systems across today’s wars.

“The humanitarian world has always had to adapt…this film is part of our effort to adapt,” said Paul Wise, Stanford professor of pediatrics and health policy, who participated in the panel at Stanford.

This film gives a historical context to the conflict in Syria since 2011, and tells the stories of several other ongoing conflicts through interviews and original footage obtained from inside Syria, Yemen and Afghanistan. It also explores the Geneva Conventions and the geopolitics that play a significant role present throughout these conflicts.

This is an especially timely and important documentary amidst the latest series of attacks in Syria’s East Ghouta, which targeted several humanitarian sites and health facilities. Just this week, the Syrian government permitted aid trucks to enter the besieged area of eastern Ghouta, but continued air and ground assaults caused the convoy to retreat before all supplies were delivered. Syrian officials were also reported to have stripped much of the medical supplies from convoy – including surgical supplies and trauma kits.

Morrison and Kenny aim to shine a spotlight on what is happening in many parts of the world and inspire action. Through continued activism, public awareness and outcry for change we can all help put an end to this barbarianism. Watch the film at www.thenewbarbarianism.com.

The screenings were hosted by the Stanford Center for Innovation in Global Health on March 5 and the University of California Berkeley Human Rights Center on March 7, 2018. 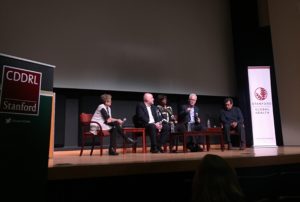